Opening this weekend in Melbourne at Helen Gory Gallery… 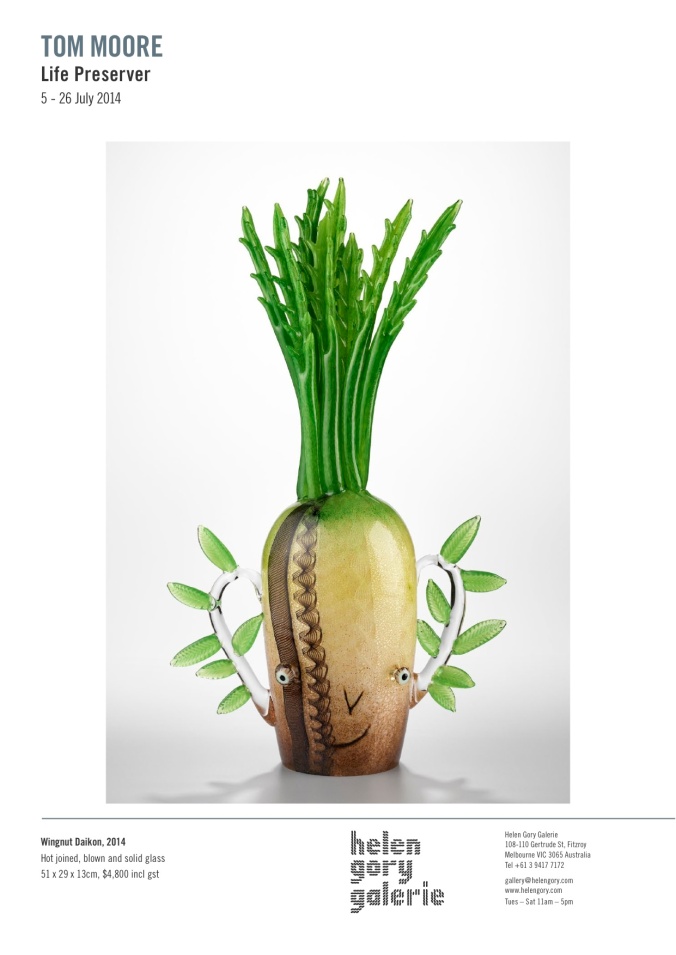 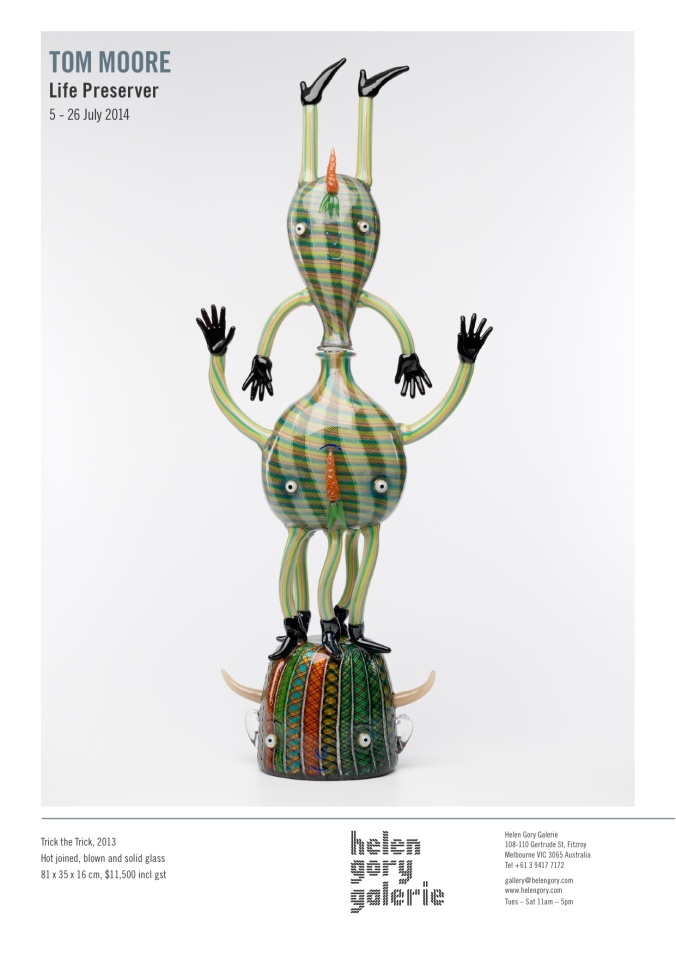 Tom Moore makes art from glass. But in many ways – in fact, in nearly all ways – he’s anything but a ‘glass artist’. Sure, he’s immersed in the Australian glass scene, working at the Jam Factory where he is a truly dazzling hot-worker, a master of the most technically fluid of artistically physical skill-sets. Sure, too, his work sits in a lineage of what we could call ‘animated glass’. I’m thinking, immediately, of the little Murano animals (kind of like balloon animals in glass), and, of course, Oiva Toikka’s refined glass birds. Sure, also, technically, there’s a strong debt to Italian makers, and a shared stylistic flair.

But once all of that’s acknowledged we’re done. I feel Tom’s creative kinship is truly with what we might call the shy Australian visual poets: Shaun Tan, Michael Leunig, Reg Mombassa. Like their work, Tom’s is instantly accessible, coy without being cloying, gentle and antsy all at the same time. Like them, he makes characters whose existence is about taking us on poetic journeys out of our daily lives and into the crevices of our imaginations. Seen within this context, his work has a lo-fi charm and grace, an underdog spirit intent on seeing beyond the techno, the commercial and the posturingly academic. Within this space, Tom’s folk are beings we identify with, empathise with, feel charmed and, on occasion, mildly revolted by. They are creatures of complex feeling, little crotchety tendernesses given form and distinct, resonant personalities.

Those in this new show are fresh tweaks on old formations. In the past, a kind of chaos reigned. His sprawling dioramas and animations set up road journeys where anything might happen – anarchy prevailed. In this, a Shaun Tan-esque dystopia was at play; there was a gloom in the field. And, in them, forms quite obviously folded into each other in response to the marauding environment and from the mutations within. They were examples of the effect of both nature and nurture. Indeed, it was as if the process of natural and social evolution was at play in front of our eyes, every mutant being in the process of turning into another mutant being and then another and another.

Obviously, this is the major through-line in his work; Tom’s pieces are accumulations and conglomerations, they are additive and excessive. They are always sprouting. As beans make plants that make beans that make plants, so do forms spill from forms in Tom’s work. Always and always. This ‘bean-thought’ is important I think, as it also captures the vegetable-animal quality to the figures, the spilling of conscious life across many forms. And again, the idea of sprouting also suggests a lack of containment: his universe of the imagination is always reproducing itself, never stable, never composed, forever in a state of flux.

Which, of course, takes us to these lovely, distinct new entities. My strong feeling about them is one of a wilful settling within this flux. There is repose, there is quietness. Seen in relation to his earlier work, it’s clear that Tom has deliberately pushed the chaos back and out of vision. Context is reduced, and the discourse of science asserts itself over them. They are nothing if not specimens as the glass bell jars maintain a static environment not only to showcase their delicate natures, but perhaps to slow down any further eruptions. Tom has removed himself from the primeval swamp of his imagination, taken a moment to pare things back and come to grips with what the hell he has unleashed upon the world.

But this does not reduce the personality of his beings. Indeed, they seem to come alive more than ever. His cat, inner pickle, pickled Giraffe and more are positively beaming in rude, happy animal-vegie health. The forms remain exquisite mutants, deliberate freaks, charming between-species-efflorecences. Our impulse can only be not to tame them, or to continue to contain them, but to let them free, to maybe live with them a while, before they roam back to whatever dank strangenesses they came from. The life he has preserved is not fixed. If it was it wouldn’t be life, at least not in Tom’s rapidly sprouting evolutionary way. Ultimately, then, Tom Moore’s moment of science is about the science of wonder, not control. 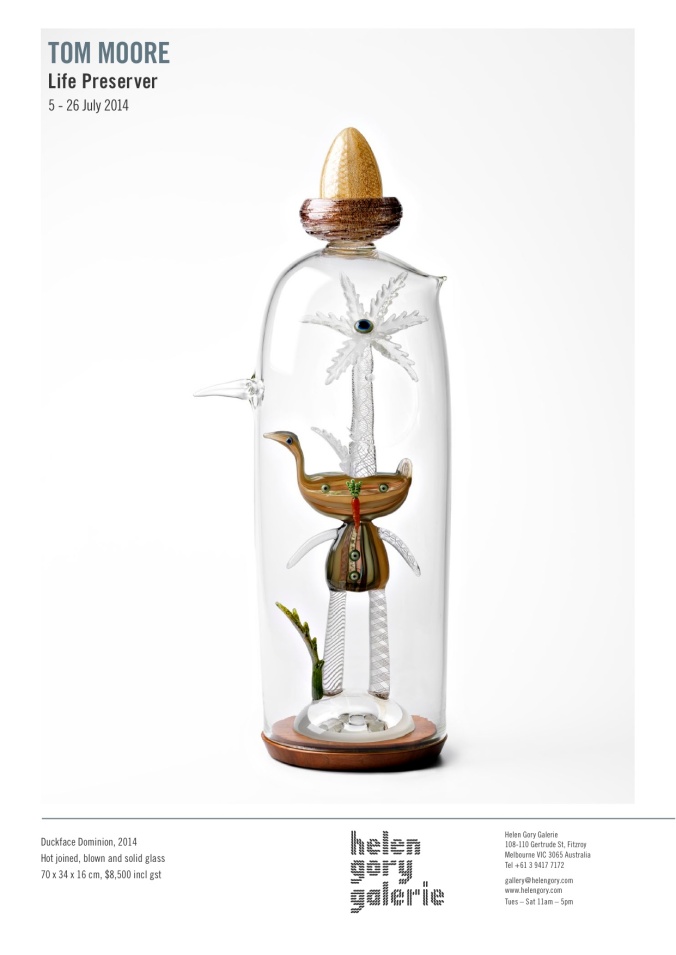 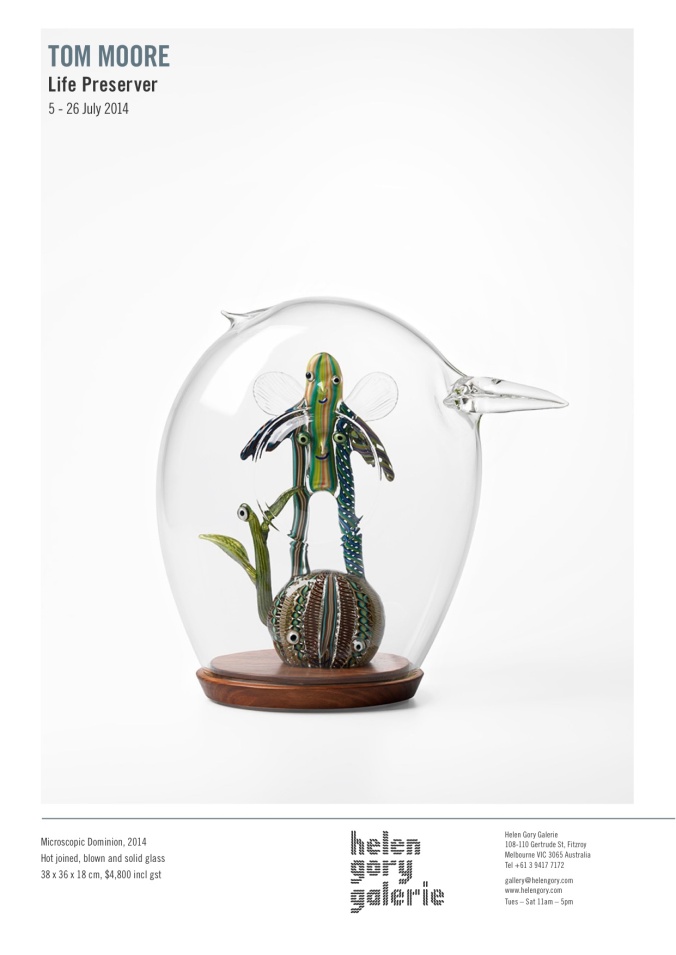 Catch it if you can.