It’s nearly time for the foxtrot… 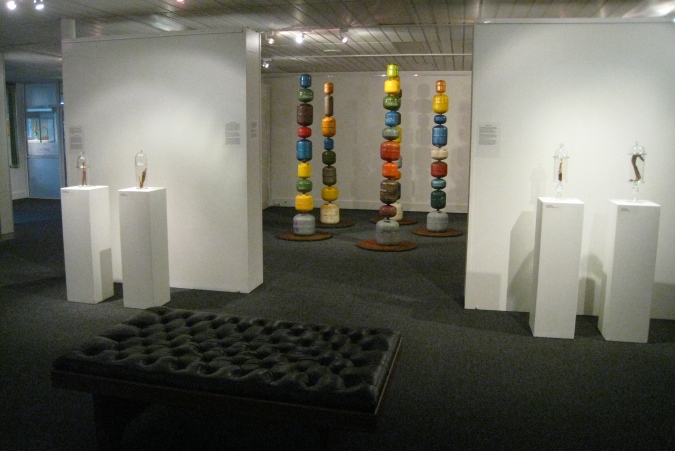 The power of art as a social tool.

Two years ago the Bega Valley Regional Gallery formally instituted an annual Contemporary Indigenous exhibition, to be held every July in concert with Naidoc Week. The last two exhibitions, Contemporary Primitive and The New Black, celebrated a diverse range of work by five indigenous artists with innovative practices that transpose traditional techniques away from the stereotypical into a visual currency that more succinctly reflects their own socio-historic reality.

This year the tables have been turned. Bridged metaphorically by the superlative work of indigenous artist Danie Mellor, six non-indigenous artists were invited to contemplate the concept of Atonement. All have responded to what can only be regarded as contentious territory with a sensitivity that reminds the viewer that we all share an ethical responsibility in the process of reconciliation, and that the resolution of the parlous state of indigenous affairs remains a shamefully neglected blight on our (seemingly not so)fair nation.

At the foreground of the exhibition, in just a whisper of an echo of the Aboriginal Memorial at the National Gallery of Australia, stands a towering sentinel of gas bottles. Sculptor Geoff Farquhar–Still found inspiration for this piece in the pukumani poles at the Art Gallery of NSW; the overwhelming sense of presence and connectivity, of the physical and emotional experience of the poles, impacted profoundly on his approach to his own work. The way of all things 2011 became an immutable embodiment of expiration.

Imants Tillers, recognised as one of Australia’s foremost contemporary artists, has two works in the exhibition: the first, Nature Speaks: AX 2002, is from a series made in collaboration with Papunya artist Michael Nelson Jagamara; the second, Nature Speaks CV 2011, was painted specifically for the Atonement exhibition. Featuring a fragment of the Walt Whitman poem One’s self I sing and a litany of extinguished Tasmanian aboriginal tribes, the work is both an expression of regret and a call to brotherhood.

Nicola Dickson’s exquisitely decorative paintings – exploring the blending of the exotic and civilization – spring from imagery first created in 1807 by Barthelemy Roger in an atlas describing the voyages of the French explorers Francis Peron and Nicholas Baudin in Pacific and Australian waters. The work is a delicate reminder of the imposition of colonialism on the natural order of the time.

Alex Asch also explores imposition, though of a more strident nature; his work reflects on the harmful introduction of perverse government policy from The Intervention to the mooted suspension of the Racial Discrimination Act, and the insidious harm compounded by ‘lifestyle’ (tobacco, refined sugar, grog…) If deaths in custody weren’t heinous enough, consider deaths through no-brand legislation. 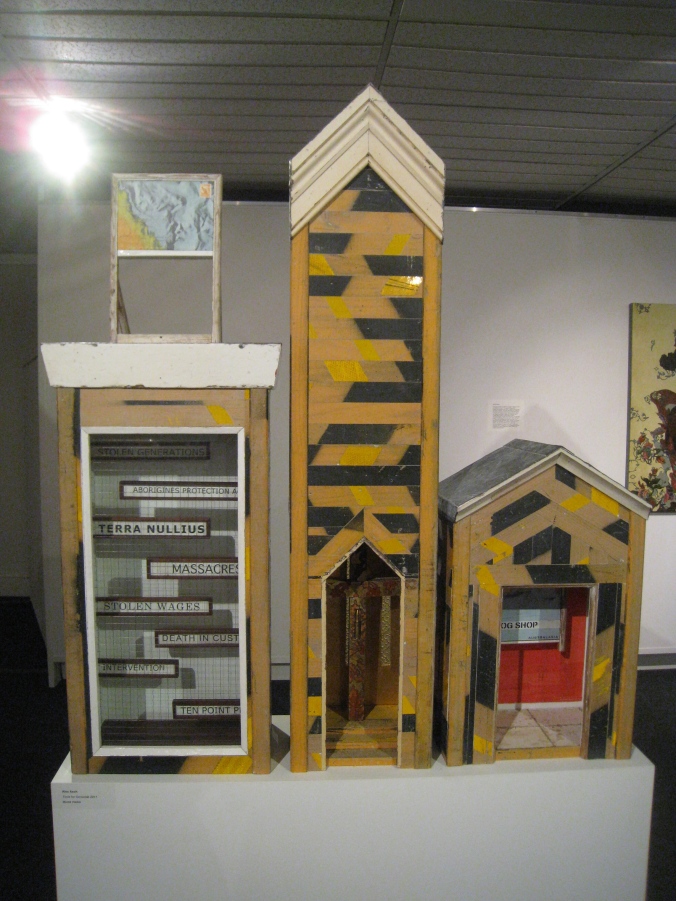 Simon Maberley’s reliquaries pay tribute to indigenous people he has met at festival’s and political and/or environmental campaigns over the years; events and relationships that shaped him philosophically and fed his appetite for compassion. The narratives are personal, the social awareness true. The blown glass vessels symbolise the precious nature of the fundamental tenets of respect held within.

Mariana del Castillo tackles the fraught subject of the Stolen Generation, with a beautifully sewn tableau of the doll/child, left abandoned on an uncompromising straight-backed chair, the spectre of abuse lurking, grinning, from the closet. The loaded elements tell the story, the narrative stitched together with painfully prescribed care, cockroaches scuttling in the background.

Danie Mellor, the one indigenous artist in the group, rounds out the party with the seductive display of colonial accoutrement; specifically the pomp, circumstance (and bling) used to dazzle indigenous populations into accepting imperialist rule. The artist explores the correlations of ceremony and initiation (hierarchical and secretive) that exist between two seemingly diametrically opposed cultures. Dignity, one suspects, resides with the natives.

Atonement is a fabulous show – strong, emotive…groundbreaking, even.

This is sensitive, taboo territory, notoriously difficult to navigate and consequently usually given a wide berth by non-indigenous practitioners. But for artists with an evolved social conscience, who are appalled by the ongoing inability of this nation to reconcile the tremendous wrongdoing still perpetuated against the first people of this land, Atonement represents an infinitesimal step towards at least some measure of moral reparation.

Politics aside, this is a quality show in every sense – and seriously worth the drive.  On until August 6th.

More snaps here, including a peek at the opening.

Sorry to have been off the air for so long, but things have been inordinately busy at the Hideout of late; the work-party ratio has hit new heights and the poor old bloggo has been squeezed in the priority stakes. The good news is that there’s a backlog of snaps and events to bring you, the bad news is it’ll come through in trickles.

Anyhoo, we’ll tantalise you with a snap or two of the pre-prep for Atonement, the exhibition opening at the BVRG tonight…

Nicky and Geoff dropped off their work on Tuesday…

…for what promises to be a truly stellar show.

Full story and picks over the next week.