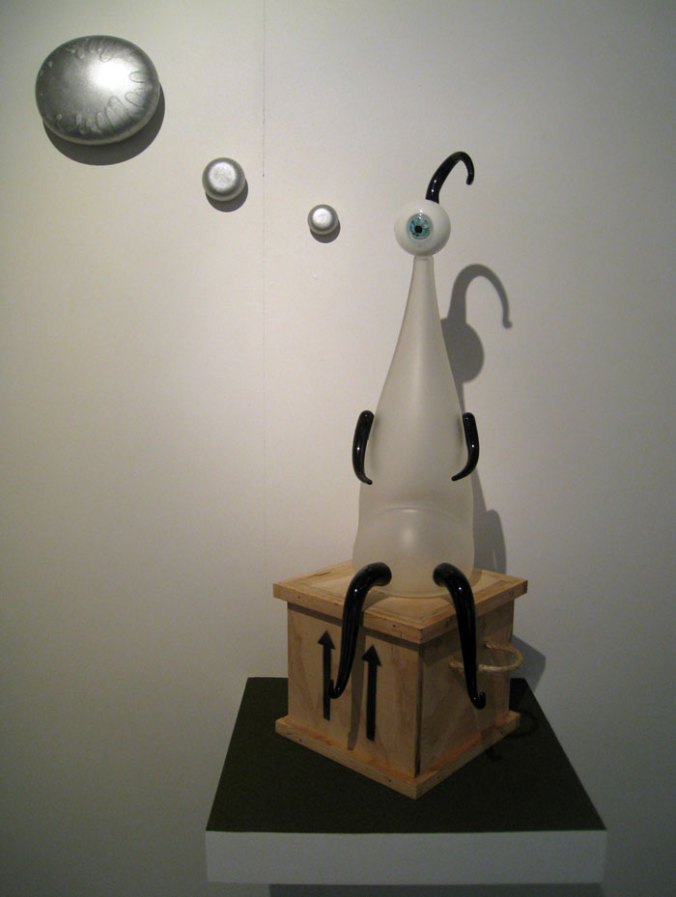 As promised, here’s a little wander around Bernie and Matt’s gorgeous show at the Bega Valley Regional Gallery; even the wall blurb…

In 1988, the ANU School of Art established the Emerging Artists Support Scheme (EASS) to support artists at their critical point of graduation from the School. Over the years, EASS program has developed to include a diversity of scholarships, prizes and awards – all established with the generous assistance of the School of Art Patrons.

In 2009 the Bega Valley Regional Gallery joined the ranks of the Patrons, offering an exhibition to a Graduating student of exemplary merit at the annual Graduate Show.

The inaugural recipient of the award is Bernadette Foster, whose work is featured in this current exhibition thoughtworks, officially opened on Friday 4th February by the Head of the ANU School of Art, Gordon Bull.

Bernadette, who recently moved to Cobargo where she intends to establish a glass studio, describes her work as being fantasy objects that are the direct result of the forces that shape her daily life:

“In many ways my work is dependent on my relationship with my daughter Siofra, on the things that I’m exposed to because of her, our playful engagement and the stories we read together.

The world as seen through the eyes of a nine year old infuses my creative process, and this world I believe is familiar to all, as well as uniquely experienced by each one of us”.

‘Ultimately, my emphasis is to value the place of dreaming and imagination in contemporary life. I love working in hot glass, and this body of work displays a balance of skill and playfulness, as I push my technical abilities.’

thoughtworks also showcases the latest work from Bermagui artist Matthew Jones (who, quite coincidently, won last year’s Far South Coast Living Artist Scholarship.) His practice, too, has a playful, day-dreamy and colourful bent – though with a sense of quietude that provides a lovely visual foil and balance to the joyful pop-toon nature of the glass.

Matthew’s wonderful play of scale coupled with the soft serenity of the nursery emote the artist’s own current reality; of recent fatherhood. The portrait of baby Miro is, in effect, our very first ‘baby snap’ of a barely two-week old Jones Jnr.

In thoughtworks, the connection between creation, life and art has never been more sweetly portrayed, with an emotional intelligence that links us all to our common humanity. 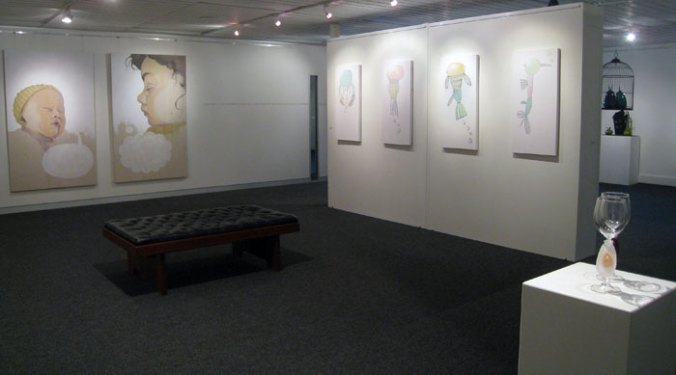 It’s an absolute sweetie-darling of a show. And out in the foyer vitrines the Gallery’s featuring (courtesy of Steve Fox from Mogo Raw Art) the work of ceramicist Michael Williamson…

All in all, a little ray of sunshine in an otherwise disastrous general climate.

[We’re foregoing newspapers and current affairs programmes for the time being. n(Ed)]