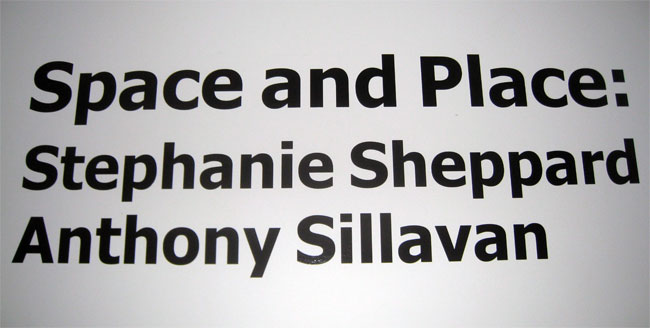 The Gang missed the opening, unfortunately, so there’s no social swirl  – but we figure you’d like a quick squizz at the show nonetheless…

Artists Stephanie Sheppard and Anthony Sillavan live in Cooma and make work that reflects their individual environmental interests. While Stephanie finds inspiration in the perennially dramatic high country landscape, Anthony is driven to explore the discarded detritus that maps the relentless littering of day to day existence.

Artist statement:  “On the edge of reality.”

I live on one of the driest continents on earth. The landscape on this continent is the main subject of my work. To me it is the most beautiful of harsh places. It is a physical space, surrounded by time, wind, the elements. I work in the landscape and absorb its heat, cold and sounds. This space is one of awe and I can think of few more fulfilling activities than to try and capture at least some of its immense and mysterious essences. 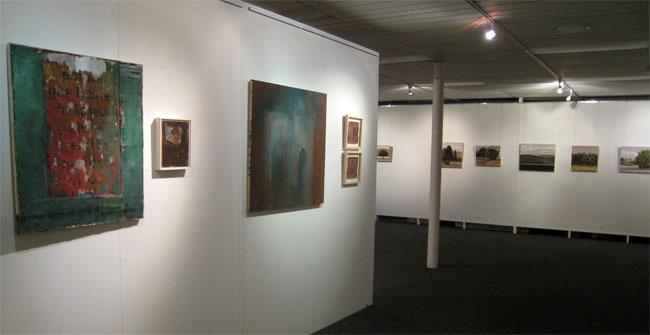 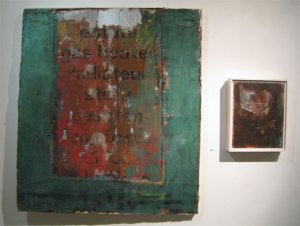 If we live in a shrinking world, within interdependent economies, expedient borders and briefer histories, an artist might be forgiven for shunning a grander vision for a more particular and personal one.

Even so, this work does draw heavily on traditional concerns of the description of space within a surface and the relationship of tones within that space.  It is also concerned with the location of the artist within a temporal context.  It is sculptural to an extent, the result of a long involvement with collage and the habit of collecting debris.

The habit extends to the photographic recording of various sites where debris is collected, a visual diary and record keeping process.  Living and working in cities and towns have contributed to an emphasis on the built environment for visual source material.  The shadows evident in an urban setting describe tones and provide a language of mood.  Inexplicable interactions between planes provide intrigue and potential for interpretation through different materials.

Ruined structures particularly have provided spaces for contemplation and where walls no longer support rooves, the echoes of history can escape into the imagination.  For me, an enigmatic and melancholic quality surrounds all things that have surrendered their original function such as lost keys, detached bolts, broken bricks, leaf litter, ruins, files, papers or empty public spaces all provide scope for a new exploration, new layers of moments.

These works are a grid to a map of moments. They are created by layers with the idea of allowing a viewer, and the artist, to make a discovery:  a transient sense, a moment suspended, a pattern recognised, something thought lost, a vignette, an isolated thing waiting to be related to another thing through history or context.  These works are the collected items of journeys and walks.  To me they speak of time passing and a cycle of decay and renewal.

Where chance or intent determines that the work be seen, another world of moments may begin. 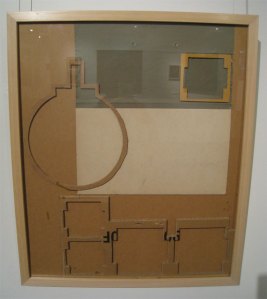 Sheppard and Sillavan have worked separately and together since the early 1990s.   Both have worked for significant periods in regional parts of NSW and have based their studios in the Monaro since 2005.

Broadly, Sheppard’s perspective is landscape based and Sillavan is more influenced by urban and archaeological concerns.

The show’s over now, but you can always visit it here – in virtual perpetuity.