Brenden’s solo exhibition Artefact of the Accident – Predator opened at the Glassworks last night – and it’s fabulous. He’s made the jump to the wall look entirely effortless, and the scale is nothing short of monumental.

And less is most definitely more in the Glasswork’s gallery space. It’s great to see the area uncluttered, and the major wall piece, Engine 2007 (above), is so commanding (1820mm H x 1920mm W x 15mm D) that it fills the room quite stunningly on its own. He’d maintained from the outset that he only wanted the one wall work in that space – and his foresight has been most effectively vindicated.  (The Glassworks had originally intended to hold a two-man show apparently, but the timing didn’t suit the other artist – just as well as it turns out, otherwise the exhibition would have been hideously cramped.)

The Predators, meanwhile, took possession of the ‘smoke-stack’ space, and we loved the rough de-constructed wooden pallet ‘plinth’ – which rather appropriately was made from Bullseye (the glass, of course, that Brenden uses in his work) pallets.

The show offers up a healthy dose of the artist’s signature socio-political/ environmental commentary, and you’ve got to love his aesthetic. He’s one of those (rare in glass these days) artists who simply won’t compromise his philosophic integrity, regardless of the marketplace and the insidious conservatism of the craft-is-decor brigade.

The Gang couldn’t attend Canberra Contemporary Art Space Manuka’s opening of Best in Show on Thursday night, which by all accounts was a real hoot – but we made sure we mooched across town to run an eye over the livestock the very next day. It’s a tad more exciting than the art’n’craft pavilion at yer average agricultural show, that’s for sure and certain…we’re only sorry we missed the hoe-down and preview swill. Best in Show went to Marina Neilson for A Domestic (above left).

And then there was the opening of Glass 07 Jewellery at Workshop Bilk. The work of several Bilk artists is on display (Helen Aitken-Kuhnen, Phoebe Porter, Ruth Allen, et al), but we have to ‘fess up that we went most specifically to see Sophie Emmet’s stuff. It’s only a week since the last Workshop Bilk opening, which probably accounts for the small – though quality (!) – turn out on the night. Alex Asch even deviated into darkly/glass territory; he dropped in for an afterwork drinkie, having just spent the day installing Brenden Scott French’s show at the Canberra Glassworks. Which, incidently, opens tonight.

Meanwhile the snaps of the day are at… 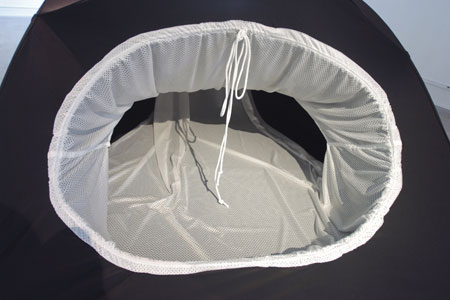 We’ve brought you the opening night of Settings, and the ‘behind the making of prima faeces’.

Again we direct you to Craft ACT’s website for the curatorial essay http://www.craftact.org.au/exhibitions/2007EX7G1

The images from the show are courtesy of Steven Murray (Creative Image Photography.) Enjoy…

The global phenomenon that is Pecha Kucha (see http://www.pecha-kucha.org/) has finally hit downunder, and last night we were treated to the launch of the Canberra chapter. It’s a ‘show and tell’ event that caters more specifically to the designer/architect mob, but is inclusive of other complementary arts media, photomedia particularly. Held at Knightsbridge in Braddon, the evening’s program was a series of presentations from a diverse group of design industry types – each allowed only 20 seconds x 20 images to get up and strut their stuff to a packed house of interested onlookers. It’s a very cool concept – hip bar, hip dudes, hip visuals. Very entertaining and engaging. The fast and furious stricture put on the presentations is key to the success – avoids proceedings getting bogged down and/or dreary, and stops it just short of being too tossy. The slide-show is suddenly over before you know it (cleverly measured, ‘cos it leaves you wanting more) and then everybody gets down to drinking and networking. Perfeck!

Last night had everything from the art director of Pol Oxygen showing stuff from Milan, to local doof-doof photography, to international mag illustrating, to architectural commissions, to found-readymade sculpture (our Jas), and so much more. And lots of cool freebies, as in Pol Oxygen magazines and Aesop body products – gotta love that!

It’s intelligent and sophisticated entertainment, and well worth keeping an eye open for  upcoming events. The Kelly Gang went with Jas (Hugonnet, curator at Craft ACT) who was one of the inaugural presenters, and have to confess that we’re kinda hooked. It’s a fascinating social study apart from anything else, which always pulls us in – a touch of Ab Fab, even. And have you ever noticed how many architecture and design industry types are called Marcus and Nick…

The mugshot parade is at…

Everybody has been so keen to know the genesis of the ca-ca that we felt beholden to reveal all. After all, the very philosophy of the Studio Glass movement itself was predicated on an open-handed fraternal exchange of technique and information – and we all know that there’s absolutely no place (morally) for secrecy in contemporary glass…

So we’ve put together a set of process shots that will walk you through the entire production; from the wax pot, to the hand moulding, through the steaming(s) and casting, to the hand-lapping, to the the robust in-house critique session…right up to the eventual installation in the gallery.

Please feel free to float any questions that might arise…

Ever since he’s been back in Canberra doing his Stephen Procter residency, Brennie and the Gang have fallen into the habit of meeting after work every Tuesday to shoot the breeze and ponder all things glass and otherwise. This evening we couldn’t – the Gang had to do a quick dash down to the coast and Brenden’s harnessed into that intense final-countdown-mode to his Artefact of the Accident – Predator exhibition opening this coming Saturday night (29th September, 6pm) at the Canberra Glassworks. 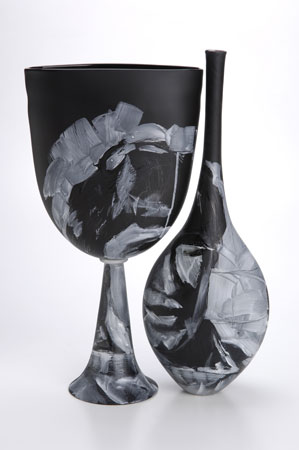 Well, it’s that time of year again – everybody’s busy finishing and shipping off their pieces for SOFA Chicago. Netty’s sent us a preview of her piece, Collection, with detail, plus a separate work depicting the Debster (top left). Lovely composition, Netster.

Tom Moore’s on a winning double, showing at two galleries at the moment; a solo at Ray Hughes in Surry Hills, Sydney, and a group show BloodLines at the Hawkesbury Regional Gallery.

Both exhibitions are seriously worth the trip. The Ray Hughes solo delivers further adventures of the irrepressible potato crew and road train, while the Hunter gig’ll be an odds-on favourite with more than just the equine crowd. Curated by Peter Fay, the latter – a survey show of horses in Australian art – features everyone (from William Dobell to Arthur Boyd to Slim Barrie to Tom) and everything (from photography to toys to sculpture to Gai Waterhouse’s hats!) pertaining to the subject – not the least being the Gang’s own high religious holiday, The Melbourne Cup. Get hold of the catalogue if you can, it’s a cracker.

For those of you with concerns beyond commission percentages and unit production, the Cross Arts Project mob have sent the following notice…

The Cross Art Projects invites you to

Exhibition: THE WORDING OF POLICE CHARGES
Many find the suppression of freedom of expression under the government’s Terror Laws unacceptable. But the suppression is spreading. The government is utilizing its legislative armory in more and more mainstream ways.Artists Mehmet Adil, Elizabeth Gertsakis and Michael Jones consider how restrictions to freedom of expression have quickly spread from remote legislative meeting rooms into civic and private realms.

The exhibition title The Wording of Police Charges is one of fifty book covers adopted by the American artist RB Kitaj for his print series In Our Time (1979). Police Charges was a bestseller of its day.The installation by Elizabeth Gertsakis is based on a censored newspaper Police News (or The Citizen), produced over three years from 1875. Her new prints take up the crude graphic style of Police News and poetically reinterpret the newspapers burlesque and pathos. Each is accompanied by a newspaper-style interpretative poem.The popularity of Police News threatened the sales of Melbounes Age and Argus newspapers. Richard Egan-Lee, a radical writer and agitator, devised the paper and drew on the political tradition of William Cobbetts Political Register

, to advocate radical, social and parliamentary reform. Egan-Lees weekly diet of illustrated voyeurism focused on local criminality and corruption as a form of social and political criticism.Egan-Lees success in producing an illustrated weekly for the masses led to the Age and Argus pressing charges on grounds of obscenity. This resulted in changes to censorship legislation, creating a legacy of strict control lasting into the 1970s.In contrast to public advocacy, Mehmet Adils installation, Envy of the Visible-Invisible, captures fragile moments in an intimate process of thinking and writing. His images and objects act as connectors between a transitory thought and the recording of it. Here, thinking and writing are in transition toward a more crystallized form of a concept.

In a more pragmatic sense, the artist responds to a rhetorical question regarding art and its place in a broader social and cultural context. Any given answer is contingent on the cultural, social and political variables of its own time and space.

Michael Jones has cut words from the banner headlines of our daily newspapers, a daily diet of illustrated voyeurism and terrorist criminality, for his series of Apostasy collages. Like Egan-Lee before him, these images have a furious political intent.We have seen the sort of society politicians will tolerate to gain their own ends: a society that on a daily basis, accepts people being held without charge, and in court, evidence heard in camera, the use of pseudonyms and the suppression of evidence from publication (and its selective release by the government). Increasingly, it is the Attorney General who tells us what we can read and know.

———-This is a contemporary visual art list. To Unsubscribe from this newsletter click on this link: unsubscribe@crossart.com.aul 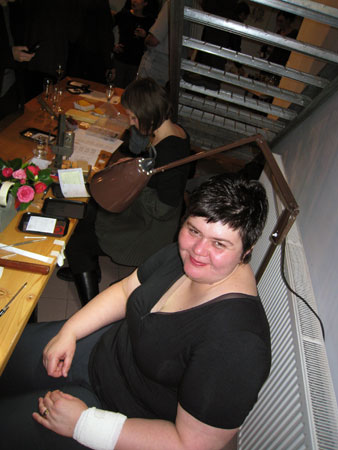 Workshop Bilk hosted a cash ‘n carry treat for contemporary jewellery afficionados at the opening of Blanche Tilden and Phoebe Porter’s Studio Hacienda exhibition/event, General Assembly, in Queanbeyan last night. There was no rest for the wicked artists, however, who found themselves obliged to work throughout the entire reception, so great was the demand for their services.

The show is prefaced on a pick ‘n mix spontaneous production line – whereby punters are encouraged to choose from a variety of interchangeable components to design a brooch, which is then handed immediately over to the artists to literally knock up, in situ, while they watch and wait.

It’s a very cute concept – and a rather nice play on performance/collaboration between the artist-journeyman and the customer. And hugely successful if one can judge from  the spanking trade of that first evening…

The event runs over the weekend – so if your hankering to express yourself in a classic Studio Hacienda kind of way, then you’d best head across the border pronto and get cracking.

The crafty dahhhling brigade was out in force, naturally…