Last night was the opening of the double treat of Pam Lofts and William Yang at Helen Maxwell Gallery in Braddon. For Pam it was the opportunity to finally give her MPhil work a proper public airing – given that her graduation exhibition had fallen victim of the infamous hail storm that ripped through the ANU in February. The William Yang room, meanwhile, had all the local art industry notables craning for a glimpse of themselves in the photo-journal of his stint at the ANU’s Centre for Cross-Cultural Research earlier this year….

Brenden and the Gang had a great old meet’n’greet’n’side-serve of culture. It was a predominantly Art School crowd of course – which makes it a bit like an extention of the working day, really.

From left to right; Tevita Havea, Brenden Scott French and Masahiro Asaka (with their respective work above)

Last Monday saw three drop-dead gorgeous blokes get together to discuss their not-too-distant exhibition Hunks of Glass, which will open in concert with the Ausglass conference in Canberra, January 2008. The show – the curator’s pick of the spunkiest men in glass – casts the odd nasturtium on the cult of celebrity and the devolution of glass into an art of self promotion; the great irony here being, of course, that the three selected chaps are all inordinately modest, unsparingly diligent and thoroughly dedicated to the craft. Their respective work is wonderfully individual. That they’re easy on the eye is just an added bonus.

In other correlating news, Tevita returned last week from the Glass Weekend 07 at WeatonArts, NJ, USA, where he sold all of his pieces, one of which was aquired by the Corning Museum of Glass. This week he started a residency at the Sydney College of the Arts, where he’ll be making work for a number of  exhibitions including SOFA Chicago, and Collect at the V&A in January. His practice will also be featured in the upcoming edition of the Craft Arts International magazine.

Brenden, who was awarded this year’s Stephen Procter Fellowship, has just returned from his residency at Northlands, Scotland, and will spend the next 6 weeks at the ANU School of Art Glass Workshop making a new body of work, conducting workshops and regaling the students with tales of his European sojourn. He has a solo exhibition coming up at the Canberra Glassworks, sometime around October. We’ll do a spread on Brenden’s northern odyssey soon….

Masa is currently on the home stretch of his Masters of Visual Art degree (here at the ANU School of Art), but nonetheless managed the time to travel to Adelaide recently to give cold-working classes at both the Jam and University of South Australia. In his spare time(!) he has been hard at it setting up the cold shop at the Canberra Glassworks and cold-working for seemingly everyman and his glass dog*. Masa’s Masters work will be shown at the ANU School of Art Gallery during the Graduate Exhibition season early next year.

[*That’s the down-side of superlative skill – everybody wants a piece of you. And Masa, of course, is much to polite to say no. Hopefully everybody will back off a tad and allow him ample time and space to concentrate on his own work in the lead up to his examination….n(Ed)]

Never let it be said that you can’t get good phone service these days – well, certainly not in-house at the ANU School of Art at any rate. On Tuesday morning (was that only yesterday?) I arrived at work to find my phone (and computer) out of order and so went to lassoo one of our eternally patient and cruelly overstretched IT guys. Simon was able to fix the computer almost immediately, but advised that I’d have to send an email fault notice through to DOI for the phone. This I did, fully resigned to the fact that it wouldn’t be high on the priority list, and therefore take a day or so…..

Well, shiver me timbers if six men didn’t march into the office not an hour later. Six, I tells you; a veritable crowd consisting of our two IT guys, the boss of the locally contracted telecommunications company, an expert from Sydney and a couple of ANU techies. I kid you not. Two of them immediately set up their laptops and got spanking on the diagnostics while everybody else avidly watched and pondered all manner of tele-technical hypotheses. Nigel and I were utterly flabbergasted. It was truly incredible.

And then, not twenty minutes later there came a further knock on the door – this time it was an entirely unconnected young chappie from DOI bearing a new phone ‘per the requisition order’. So now there were 7 blokes involved in the test fest. The expert from Sydders plugged in the new phone and I took off for lunch, leaving them all engaged in deep esoteric analysis. Sensational service or what? Bloody marvellous.

The glass community is often perceived as being somewhat isolationist in its attitude to other art forms (see the Manifesto file) but of course the Kelly Gang doesn’t subscribe to that.  We were very excited to hear last week that our friend John Boucher picked up the Art4Aid prize at a ceremony held in Victoria last week.

The award was presented by the Governor of Victoria, Professor David de Krester, at the exhibition launch held at the Victorian Art Society in East Melbourne. Our old mate Pooh sent through the pics – I’m particularly enamoured of the image of the line of dignitaries perched below the painting of a reclining Tim Costello. (Click the image for an enlargement.)

Meanwhile see the links below for more info on Stir and Art4Aid.

We’ve fielded so much speculation regarding the well-being of Krusty (ie had he ‘passed’, or worse, had we given him the mother of all short shrifts) that we thought it best to reassure everybody that he is still definitely with us. He retains his post as chief of  office security, and although 15 week old dispatch-trainee Lola may appear to have the advantage of size (and still growing!), that wily old doggy can more than hold his own when it comes to glass and office politics. Krusty would like to thank everybody for their concern and expressions of support.

Last Sunday, enroute to the Jam in Adelaide after some well earned R&R in Parkes,  Deb Jones – the Leader of the Free Glass World – slipped quietly into Canberra for an informal Kitchen Caucus meeting with sundry members of the front bench. All manner of SOGgy (state of glass) subjects were touched upon, the most significant being ” your glass is empty, let me fill it.”

Above (from left to right): The Debster with the Speaker of the Officer Street House, Barb; The Ministry of the Paper Chase, Jane and Alby; Under-Secretary of Victualling, Kez; members of the (side)Board – Sammy, The Debster, Kez, Megsie and Jane.

What is going on?

When, but perhaps more importantly why, did glass artists start labelling their work ‘mouth blown’?

What are they thinking?

When we first came across this strange phenomenon in a catalogue we had a bit of a giggle and just dismissed it as the artist being a bit of a twit. But then we saw it again elsewhere…and yet again only this evening (we shan’t say where, to save the perps any more embarrassment than they’ve surely already brought upon themselves.) God forbid that it’s becoming a trend.

But who on earth could possibly imagine that it might be cool to describe one’s work as ‘mouth blown’? Has the general dumbing down of society brought us to this? Come on, people – how absolutely ridiculous. If you profess to be a studio glass artist then of course your bloody work is mouth blown. Jesus wept! I mean, what’s the alternative for faffs sake ? What…arse-blown? Nip it in the bud, for godsake, before it leads to lordy knows what sort of contorted practices…gawd! can you imagine that demo’d at the Glassworks!

There’s been a flurry of action to and fro across the cable waves between Adelaide and Canberra of late. Hils has been hard at it getting her work finished for an upcoming solo show at Chappell Gallery in New York, while Megsie was galloping up the home straight to finish the catalogue essay in time….

Meanwhile Hils had sent over heaps of material  (images, murrines, drawings, etcetera) to facilitate the creaky old mental processes – and now that everything is done and dusted we thought you might like a gander at the blowing process at least. We’ll post some finished work later, when the images come through.

The photo mosaic, available on the following link, was snapped by the lovely Gabriella Bisetto. Thanks, Gabs!!!

The ANCA Tenants Show, Intimacy in Public, opened on Saturday night (14th June) and the Gang dashed in full of serious intent only to be sabotaged once again by a recalcitrant camera. We barely managed to get off two decent shots before the damned thing took a death dive. Our utter desolation was soon ameliorated by the darling Wendy Meyen who willingly stepped in and took snaps on our behalf –  graciously suffering the ignominious circumstance of being dragged all about the place and shoved at various people…

Until Wendos sends the images through we can only post the original two….

Meanwhile it’s a great exhibition with lots of very diverse stuff – obviously, given the range of mediums.  But there’s something for everyone, even nanna. Check it out at ANCA Gallery, Dickson, until 22nd July.

STOP THE PRESS!!  Wendos has just sent through the snaps. There aint loads of them, because her battery was on its last legs…ah, doesn’t matter! 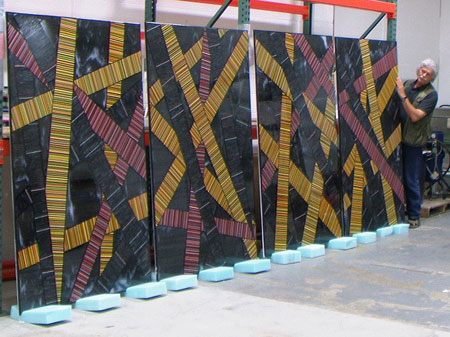 The Kelly Gang just had an exciting ‘postcard’ from Klaus in Portland, Oregon. He’s been over there since early June, making new work at Bullseye for an upcoming mega show in America (which will link up with his touring Klaus Moje: Glass, Living Treasures: Masters of Australian Craft exhibition once it has finished its Australian rounds and heads Stateside, where it will have a fittingly prestigious itinerary, including the Portland Museum and The Museum of Arts and Design in New York.) More of that further down the track. Meanwhile he’s happily exhausted, having almost finished what must be his most ambitious (in magnitude, for sure) undertaking to date. And what a masterpiece (in the correct sense of the word.) It’s Wagnerian! Klaus’ll be heading home next week for a nanosecond of R&R before he’s off to Broken Hill for the next leg of Living Treasures Aussie openings tour.